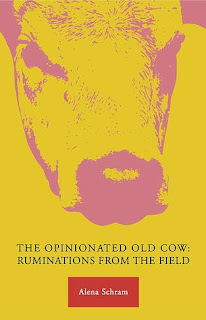 After a lifetime of enforced good diplomatic conduct, Alena Schram has begun venting her opinions on subjects dear to the dicky hearts of baby boomers, from the perils of Facebook, the annoying tendencies of husbands who co-shop, and the defective rearing of grandchildren, to sports cars for the menopausal, bras that winch, and chin hairs with minds of their own.

Alena (aka the Opinionated Old Cow) grew up and attended university in Toronto. She has spent a lifetime trailing her husband John, a retired Canadian ambassador, around the world. Together they served in seven overseas capitals and raised three children. Still married to each other (and in perpetual, perfect harmony), they live on an island in Lake Ontario, where Alena spends her time writing about – and alienating – her family, friends, and neighbours. Her Opinionated Old Cow column appeared in the National Post, and she has written for other Canadian newspapers and magazines as well as the International Herald Tribune (now the International New York Times).

ALENA WRITES: I’m a 70-year-old reasonably attractive woman with a good education, a lifetime of experience, and all my original organs, lenses, joints, and teeth. In more than 46 years of marriage, I’ve lived in eight countries, seven of them as diplomatic appendage to my husband, a retired – and very tolerant and accommodating – ambassador. We have three grown offspring, all married, and five grandchildren. I have a wide circle of friends and probably an equally wide circle of people who can’t stand me. And I live on an island, in a very small but interesting community.

Also available as an ebook from the usual sources.