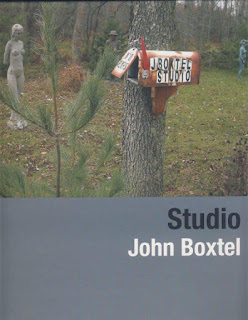 Perhaps what makes John’s work so powerful and so raw is that, like him, it is honest. Truthful. You can see every fingerprint, every stroke used to sculpt. I've always loved that you can see exactly how John has made the pieces come to life. Nothing is ever polished up and glossed over – sort of like the man himself. His pieces reflect his attitude that both art and people should be unencumbered by bullshit. This book is a testament to John’s work and to John as an artist.
~ Jonathan Wright 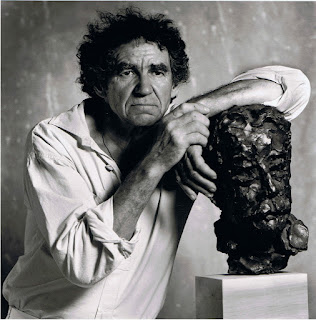 "Art has shaped John Boxtel's life just as he has shaped a life for and from his sculptures."
~ Mark Bergin, Kingston Heritage

John Boxtel was born in the town of Goirle, the Netherlands, and emigrated to Canada in 1954. He began working as a carpenter in Whitby, Ontario, and then studied sculpture at the College of Art in Toronto and the Artists' Workshop in London, Ontario. Beginning in 1967, he taught art, first at high school and then at college level. In 1980 he moved to an island in the Thousand Islands in the St. Lawrence River to work full time as a sculptor. John’s commissions for public monuments in the Netherlands, Switzerland, Canada, and the United States include the Ukrainian Project, a series of sculptures erected at the sites of Ukrainian internment camps in Canada during the First World War, the cenotaph at East Gwillimbury, the Molly Brant memorial in Kingston, and a number of private sculptures around the world. John has had gallery exhibitions in Toronto, Hamilton, Montreal, Kingston, Boston and the Netherlands. He is the subject of the documentary film Moving Target. He continues to work in his studio on the Napanee River.   Read more about John at https://en.wikipedia.org/wiki/John_Boxtel.


As a child during the war, I had a great need for beauty. I was fascinated with the wood-carvings of the Black Forest. I was particularly drawn to the nativity scenes I saw in the window of a store near where my family lived in the town of Goirle. I would stand for hours looking at the pieces and admiring the skills that went into them. I fervently wished that one day I would be able to make such things.
From the Buddhist temples in Japan to the cathedral in Amiens, the great galleries with marbles by Bernini, and the marvellous bronzes in Napoli, I went to many places to see what others before me had done. I studied them to try to learn from them and the great minds that created them. For years I studied to master the techniques of making sculpture. Over time, I have discovered for myself many more techniques. I know anatomy and the structure of the figure intimately, so that I can depict it in all possible ways.
So many portraits I have made and so many characters I have translated into my sculptures, but still the inspiration is there, and I go on creating sculptures. Still I look and search for ideas to carve in wood or translate into bronze.
Someone once said that the life of an artist the juxtaposition of agony and ecstasy – the agony of worrying if the talent will still be there every time a new project is started, and the joy of meeting the need to create. To see the work completed and in its rightful space gives me a feeling of joy, respect for the work, and the fact that it was not before. My works are spread over many countries and fill many spaces, each one telling its unique story. I cherish the memories of them all.
To this day I am emotionally overwhelmed by a face, a song, or a sunrise. I love opera and classical music and find my inspiration in them. To stand in the cathedral of Chartres with the splendid windows warming the interior or to sit in the cathedral of Toledo hearing the fantastic sound of the organ – those are memories that stay with me, that inspire and enrich me. I have been to the opera in La Scala, Milan, Rome, and Vienna, and to the Metropolitan in New York. All this has made me rich beyond understanding, so that I am never lonely.